Around late November 2013 I – too – got contacted by Packt Publishing, asking to do a review on Ansible Configuration Management. I was a bit surprised, as I had declined their offer to write that book, which they asked me exactly two months earlier. Two months seemed like a short period of time to manage to write a book and get it published.

Either way, I kind of agreed, and got the book in pdf, printed it out, started some reading, lended it to a colleague (we us Ansible extensively at work), and just recently got it back so I could finish to have a look at it.

“Ansible Configuration Management” is an introductory book for beginners. I won’t introduce Ansible here, there are a lot of good resources on that, just duck it. Ansible being relatively new, has evolved quite a bit in the previous year, releasing 1.4 by the end of November. The current development cycle focuses more on bug fixes, and under the hood stuff, and less on new syntax, which was quite the opposite when going from 0.9 through 1.2, and up until the then and now current 1.3.

Knowing what major changes would get into 1.3 was easy when you followed the project. One of the major changes is the syntax for variables and templates. Basically, don’t use $myvar or ${othervar} any more, but only use {{ anicevar }}. If you know ansible, you know this is an important thing. I was very disappointed to notice the author didn’t stress this. Whilst most examples use the new syntax, at one point all syntax’s are presented as equally possible – which is correct for the then latest 1.3, but it was well known at the time it would be deprecated.

Of course, writing a tech book on a rapid evolving Open Source tool, will always be deprecated by the time it gets published. But I think this should be expected, and a good book on such a subject should of course focus on the most recent possible release, but also try to mention the newer features that are to be expected. Especially for a publisher that also focuses on Open Source.

A quirk, is when code snippets are discussed. Some of those longer snippets are printed across more than one page, and the book mentions certain line numbers. Which is confusing, and even unreadable, when the snippets don’t have line numbers. Later in the book, sometimes line numbers are used, but not in a very standard way: 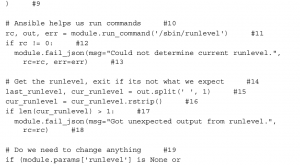 Whilst most of this book has a clear layout at first sight, things like this don’t feel very professional.

This books gives a broad overview and discusses several basic things in ansible. It goes from basic syntax, over inventory, small playbooks, and extended playbooks ans also mentions custom code things. It gives lots of examples, discusses special variables, modules, plugins… and many more. Not all of them, but that is not needed, given the very good documentation the project publishes. This book is an introduction to ansible, so focusing on the big principles is more important at this point, than having a full inventory of all features. As it’s a relatively short book (around 75 pages), it’s small enough to be appealing as a quick introduction.

It’s a pity the publisher and the author didn’t pay more attention to details. The less critical user, with little to no previous ansible experience, will however get a good enough introduction with this book, with some more hand-holding and overview than what can easily be found freely on-line.